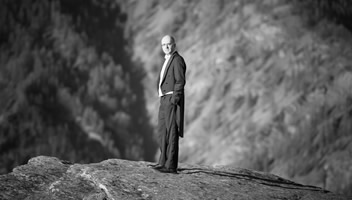 BRAHMS Piano Sonata No. 3 in f. 6 Piano Pieces, op. 118  Roberto Plano (pn)  ARKTOS 200691 (65:52) –
Review by Jerry Dubins The name Robert Plano sounded so familiar to me, I was sure I’d encountered him somewhere on disc before. But search as I might through reviews past and present, not only could I not find anything by him I’d reviewed myself, but nothing showed up for him as a header in the Fanfare archive. But it kept nagging at me and so I kept digging. At last I found it. There it was in the Collections section of the 30:2 (Nov-Dec, 2006) issue, under the heading of “ENCORE!” a review of the finalists at the 12th Annual Van Cliburn International Competition, and buried within it was a single mention of Robert Plano as one of the top prize winners. At least it reassured me that I wasn’t hallucinating…again. If you visit Plano’s website (robertplano.com), you’ll find that he has quite a few CDs to his credit, but most are on small or private labels that don’t have much presence in the U.S., and so you will not find them listed on the major mail order sites. I gather from the current release that it’s underwritten or somehow sponsored by Honens, Canada’s leading presenter of piano music and founder of the Honens International Piano Competition, of which Plano is the 2003 Laureate. Plano is an Italian pianist with a trophy-room full of awards and international concertizing career. Yet, despite his having recorded a number of CDs for various labels (as noted above), you could say that this 2006 Canadian disc, is Plano’s debut to Fanfare’s readers, and it comes in major, heavily contested repertoire. Among Brahms’s earliest solo piano works are three epic sonatas, the last of them in F Minor and in five movements, being the biggest of the three. Herculean as it is, the colossus is easily conquered by Plano’s steely strength and resolute determination. He possesses the muscle and endurance to exert control over the score, but having subjugated its combative Allegro maestoso, Plano offers his captive a genuine gesture of kindness and compassion in the Andante espressivo. Snapping out of metaphor mode, I’m simply saying that Plano has both the technical and musical aspects of Brahms’s sonata fully within his grasp. This is a performance at once as powerful as it is poetic. There are lots of alternatives, of course, to consider. I omit Hardy Rittner from this list, for though his recent recording of the piece impressed me very favorably, he is engaged in recording Brahms’s solo piano works on instruments of the composer’s period, so his version is in a different category. But for performances on modern concert grands I was so taken with an entry by Sheila Arnold in 32:3 that I declared it to be my new benchmark for Brahms’s Third Sonata for some time to come. I won’t say that with the arrival of Plano Arnold’s time has come and gone, but I can say that he runs her a race too close to call. Forty years later, in 1893, at the age of 60, Brahms composed his penultimate set of works for solo piano, the six pieces of op. 118. Finding themselves far removed from the content, form, style, and expression of the youthful sonatas, not all pianists are equally comfortable in late Brahms. I’ve previously sung the praises of Nicholas Angelich in these valedictory pieces, but I very much like Plano’s way with them as well. He takes a few liberties with the scores, namely, introducing subtle luftpausen at phrase junctures and points of articulation, but I find them quite in keeping with the poignant character of the music; they seem to enrich the wistful nostalgia inherent in these very personal, intimate utterances. With this release, Plano proves himself a significant keyboard talent and a Brahms interpreter of keen insight. Plano’s piano is not identified, but the recording of it captured by Arktos’s engineers in the Banff Centre in Banff, Alberta, is open and natural sounding, and has excellent depth and dimensionality. Strongly recommended.
Jerry Dubins